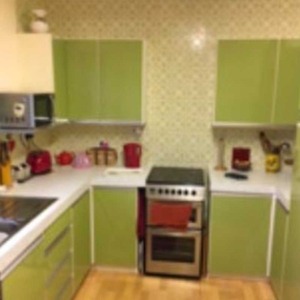 A water leak from the meter was discovered in a property occupied by an elderly lady who was very vulnerable.  Due to the considerable time the leak had been ongoing before being noticed by the occupant, the flooring had become wet and some of the end panels, plinths and the under sink cupboard were badly blown.

During our inspection we found this kitchen was fitted by the occupant’s late husband in the 1970’s but had been kept in immaculate condition baring sentimental value.

Due to the age and size of the units it was not possible to simply obtain replacements over the counter, instead our joiner manufactured the new parts (a new carcase, end panels and plinths) purpose built to match the existing fit and design of the occupant’s kitchen.

Our joiner was able to install the replacement parts without causing the occupant any further disruption.

Had the customer gone through her own insurance, they would not have looked at the repair option, but would have instead replaced the full kitchen, increasing costs as not considering the sentimental value to the customer.

We were able to save the entire kitchen except for the affected areas which saved our client in the region of £6000 – £7000 for a replacement kitchen.

The difference between cleaning and disinfecting
Scroll to top

This site uses cookies. By continuing to browse the site, you are agreeing to our use of cookies.

We may request cookies to be set on your device. We use cookies to let us know when you visit our websites, how you interact with us, to enrich your user experience, and to customize your relationship with our website.

Click on the different category headings to find out more. You can also change some of your preferences. Note that blocking some types of cookies may impact your experience on our websites and the services we are able to offer.

These cookies are strictly necessary to provide you with services available through our website and to use some of its features.

Because these cookies are strictly necessary to deliver the website, you cannot refuse them without impacting how our site functions. You can block or delete them by changing your browser settings and force blocking all cookies on this website.

These cookies collect information that is used either in aggregate form to help us understand how our website is being used or how effective our marketing campaigns are, or to help us customize our website and application for you in order to enhance your experience.

If you do not want that we track your visit to our site you can disable tracking in your browser here:

We also use different external services like Google Webfonts, Google Maps and external Video providers. Since these providers may collect personal data like your IP address we allow you to block them here. Please be aware that this might heavily reduce the functionality and appearance of our site. Changes will take effect once you reload the page.