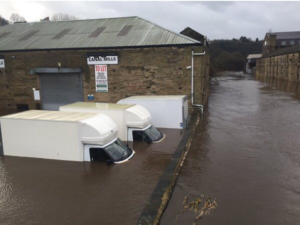 Following severe floods, a TV studio was severely affected by localised flooding which caused a halt on filming as the studio was badly affected.

We arrived on site and extracted water from the carpets initially, followed by a full deep clean and sanitisation to the warehouse and studio.

Drying equipment was installed, but unfortunately the studio was affected by a further flood of over 5ft of water whilst the drying was taking place. The flood water brought in mud and slurry which destroyed much of the building contents, the filming sets and our drying equipment that we had installed.

We removed the drying equipment and began the vast clean up. Our team attended for a full week to remove the mud, slurry, damaged contents before cleaning and sanitising the whole area.

Finally, we completed a full clean up to the car park before usual filming resumed.

Our quick and effective solutions enabled the film crew to resume filming and meet the deadlines that were in place.

This site uses cookies. By continuing to browse the site, you are agreeing to our use of cookies.

We may request cookies to be set on your device. We use cookies to let us know when you visit our websites, how you interact with us, to enrich your user experience, and to customize your relationship with our website.

Click on the different category headings to find out more. You can also change some of your preferences. Note that blocking some types of cookies may impact your experience on our websites and the services we are able to offer.

These cookies are strictly necessary to provide you with services available through our website and to use some of its features.

Because these cookies are strictly necessary to deliver the website, you cannot refuse them without impacting how our site functions. You can block or delete them by changing your browser settings and force blocking all cookies on this website.

These cookies collect information that is used either in aggregate form to help us understand how our website is being used or how effective our marketing campaigns are, or to help us customize our website and application for you in order to enhance your experience.

If you do not want that we track your visit to our site you can disable tracking in your browser here:

We also use different external services like Google Webfonts, Google Maps and external Video providers. Since these providers may collect personal data like your IP address we allow you to block them here. Please be aware that this might heavily reduce the functionality and appearance of our site. Changes will take effect once you reload the page.